Sea fireflies are totally unrelated to the fireflies on land, in spite of their name. They are crustaceans and have no backbone. V. hilgendorfii is a small animal, only 3 mm long, roughly the size and shape of a sesame seed. The female tends to be larger than the male. It is nocturnal and lives in the sand at the bottom of shallow water. It is both a scavenger and a predator, mainly dining on sandworms and dead fish.

V. hilgendorfii is produces a blue-colored light by a specialized chemical reaction of the substrate luciferin and the enzyme luciferase. It is indigenous to the water off of the southern Japanese coast. V. hilgendorfii is known to the Japanese as “umihotaru” – “umi” means sea and “hotaru” means firefly. Dried sea-fireflies were sometimes used as a light source by the Japanese army during World War II to read maps in the dim light. The primary structure of the mitochondrial DNA of V. hilgendorfii was sequenced in 2004 by two Japanese scientists, Katsunori Ogoh and Yoshihiro Ohmiya. 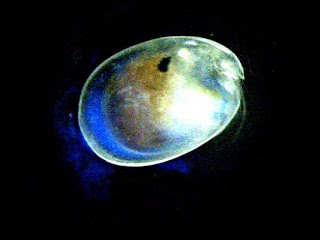 V. hilgendorfii has a beaklike projection on the front of a smooth, oval, clear carapace. The black eyes are visible through the carapace. The carapace has large notches through which the antennae stick out. The appendages at the tip of the abdomen are very large and visible between the folded halves of the carapace.

V. hilgendorfii remain buried just under the surface of the sand during the day. At night they use their antennae to move across the bottom or swim over the bottom. When threatened they will use the large appendages on the tip of the abdomen to push themselves into the sand. They also use these structures to lift themselves quickly up from the sand and into the water.

Males hold females for about 30 to 60 minutes before mating actually begins. Males transfer a packet of sperm to the female's reproductive organs. Females brood their eggs under the carapace. The larvae molt five times before reaching adulthood. Young larvae are capable of crawling, digging, and swimming.